Do you have a happy memory of time spent near water? Where everything you did was about being in, on, or beside that beautiful water? One of my happiest childhood memories is spending time at my friends’ summer cottage. While we swam, sunbathed, picnicked and played our favorite pop singles on a portable record player, I couldn’t stop gazing at the patterns the sun made on the lake’s surface. To this day, hearing Blood Sweat and Tears’ “Spinning Wheel,” conjures a vivid image of glorious sparkling water. 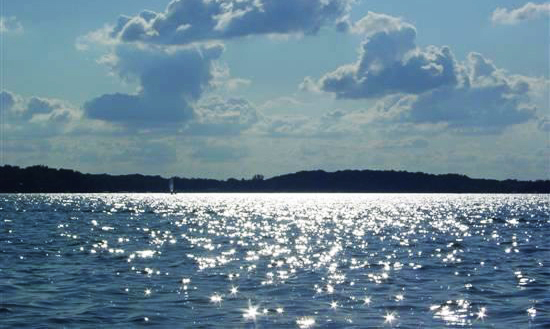 Last summer, I decided to finally do a block print of sun on a lake. My dear girlfriend Joyce, who now lives on that lake, gave me a tour of some great spots along the shore, where I took some lovely photos. 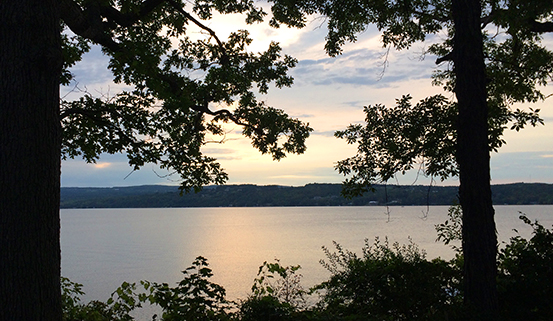 Love these trees. But when I tried to create a design from the photos, something was missing…

Then in October, on our tenth anniversary, Bob and I emerged from a restaurant to see a spectacular orangey-pink sunset over a distant lake. We jumped in the car and zoomed toward that lake, where I got a few shots right before the sun disappeared completely. 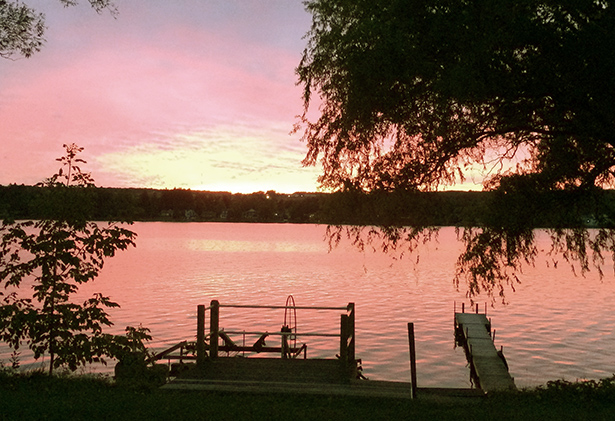 Oooo. Color! Warmth! My printmaking professor warned us to NEVER make art of a sunset. Which makes this concept even more fun. (Ron: don’t hate!)

But now it’s late October, and we have three gallery shows, four art fests, and three birthdays to do before Christmas. Plus both Bob and I get this nasty 3-week bug. Throughout November and December, there is quality time with art-lovers, family, and a sick cat. And a lot of coughing. But no art-making.

Now it’s January and the calendar is clear; ya-HOO!

I create a detailed color sketch, which I am not going to show you because that would be a total spoiler. I combine favorite elements from my photos and create a composition. Then I reduce it to six colors, which means there will be six carvings and printings. And do a lot of planning about what color prints over what, etc. Take a deep breath, and here we go…

…and here we stop: the furnace fails, and we’re in a deep freeze. It’s five degrees outside, and forty-eight in the house. Repairman says it’ll take a few days for the part to arrive. I put on my parka and start the carving. 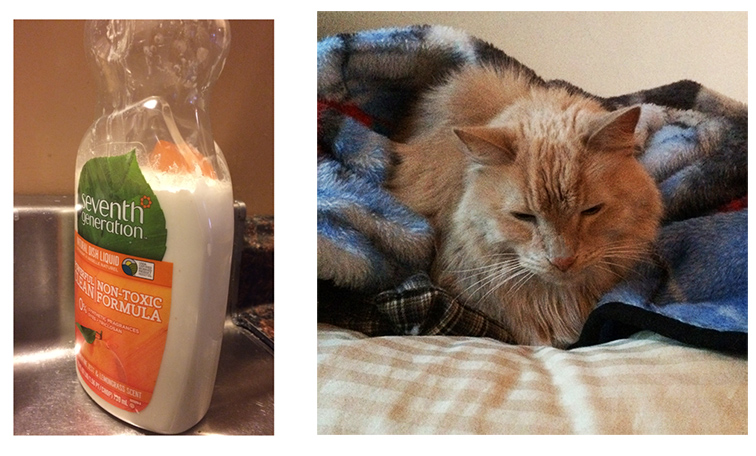 Next day it’s thirty-five degrees in the house. Dish liquid becomes dish solid. Sunny the sick cat is warmed by a flannel bag full of beads that you heat in the microwave, and a fuzzy Spiderman blankie.

Bob takes a three hundred mile road trip to glom that part, as the mercury continues downward. Kind of like when (my cuz) Almanzo Wilder set off over the vast, frozen prairie to find food for the cold, starving townspeople. Well, sort of.

Meanwhile I keep carving and reheating Sunny’s bead-bag. Our hero returns, the furnace is fixed, and block #1 is carved. Off to the printing center! 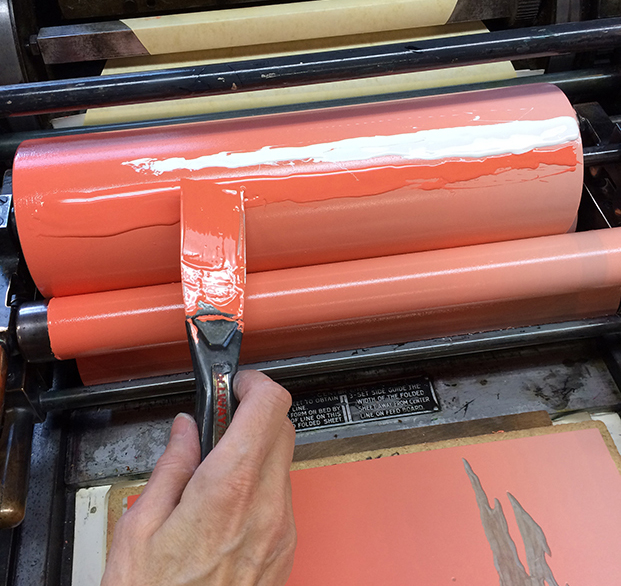 This printing needs to be deep orange near the bottom, fading to a lighter orange at the top. So I ink the press with white on the far right, a pinkish orange on the far left, and both in the middle.

Hmmm. The little white dots in the middle of the picture are intentional. The two in the lower part are not. Curse you, linoleum divots! Ehh. I’ll deal with that later.

Next carving is kind of experimental. I want to create two colors with one printing, by overlapping the orange in part, and printing on naked paper on another part.

Add a bunch of transparent ink to the mix. Yay! It worked!

(Yes, that is particle board underneath the linoleum. It happens to be the perfect thickness to raise the carving to the proper height for the press.)

Back home, I start the third carving, basking in the glorious warmth of the huge radiator underneath my desk. Sunny sprawls on the desk next to the linoleum. I’m using the first block again, and removing all the shapes I want to remain orange. 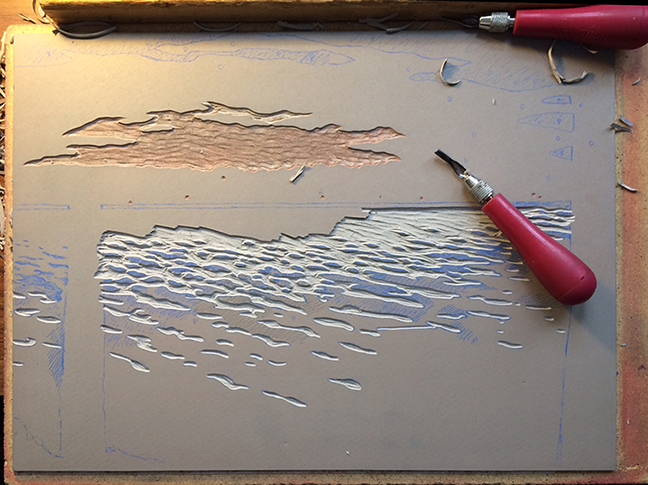 I also carve away where tree trunks will be printed later, so there won’t be unnecessary layers of ink build-up underneath them. See that long, thin horizontal line on the block (above)? I ended up removing it after seeing how it printed.

And it’s another gradation: purple at the bottom, fading to lavender in the sky. This printing takes even longer than the usual five hours (I’m printing two hundred ten sheets each time).

The next morning we have to say good-bye to Sunny the very sick cat. Normally he hates being put in his carrier, and continues to complain during any car ride. But on his last ride, he is quiet, and looks surprisingly contented, as if he agrees with our decision. This helps. But it is still a very sad day.

Next day, I’m re-using that same carving again (this is called reduction printing, when you keep removing more from the same block after each printing).

I carve away all the shapes that I want to remain purple, and print blue. Can you tell what that rectangle shape is going to be?

It’s time to deal with those two divot-dots. Next printing needs to cover them up! It also needs to cover up that yellow sky where the tree trunks will print, or else the yellow might show through the final color.

Starting with a new sheet of linoleum, I do a carving that can be used for both the fifth and sixth printings: dark blue, and black.  Ooo, looking good. I love the little lights on the strip of land across the water. Makes the lake seem like a friendly neighborhood.

Now I remove just the shapes that need to remain dark blue. What’s left will print black. I forgot to take a picture of the last carving, because Katie the videographer from our local PBS station is at the printing center, interviewing me and filming my last printing. I’m kinda flustered.

Not only that, but as the cameras roll, the black doesn’t line up with the dark blue! Fighting the urge to curse on camera, I fail to trouble-shoot an issue that is usually manageable. Thank goodness Bob is there, and fixes the problem by making mysterious micro-adjustments to the press! Fewf! Katie films the whole ordeal. The piece will air in late February, panic scene and all… 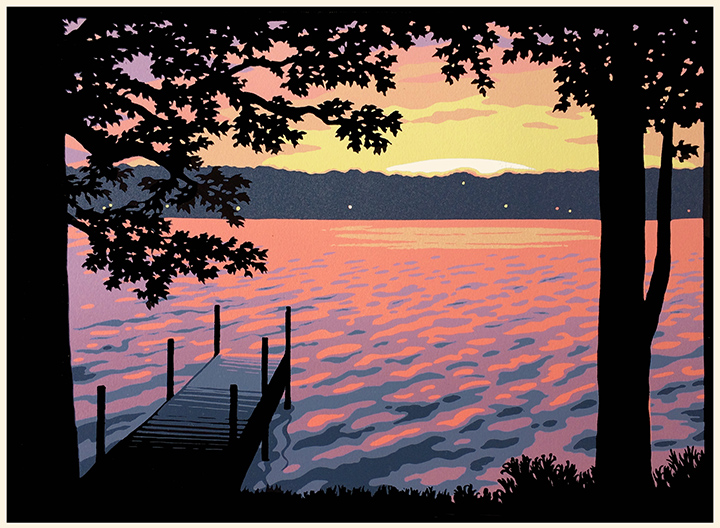 Ta da! Usually I can’t tell if I like a print at first. But I like this right away. I can almost feel the summer air and hear “Spinning Wheel” playing. 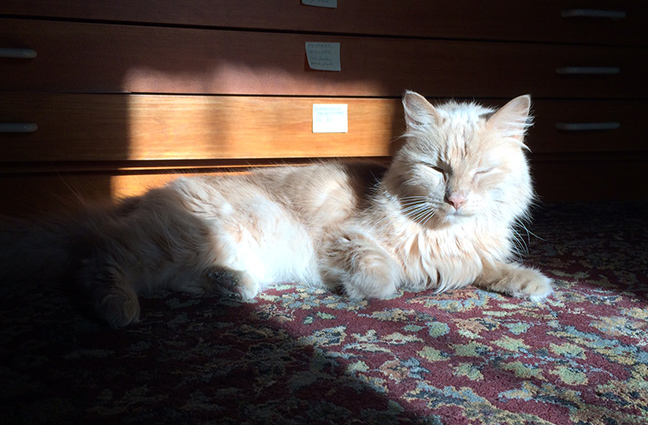